Memory and temporal structure are the new spaces of art to me. Deleuze and Guattari arrive at a similar point in their critique of late capital and schizophrenia with the rhizome structure, a decentered and nonhierarchical form that perfectly illustrates their metaphor for counter culture. A fixation on multiplicity gives their expressions all the more immediacy because of its fragmented nature.  pg. 354

Autonomous zones are interstitial, they inhabit the in-between of socially significant constellations, they are where bodies in the world but between identities go: liminal sites of syncretic unorthodoxy... Autonomous zones my be though of, in temporal terms, as shreds of futurity. Like "outside", "future" is only an approximation: there are any number of potential futures in the cracks of the present order, but only a few will actually unfold. Think of autonomous zones in terms of time, but tenseless: time out of joint, in an immanent outside (Nietzsche's untimely).

-Brian Masumi, A Users Guide to Capitalism and Schizophrenia

In the Electronic milieu that we all move in today, the DJ is a custodian of aural history. In the mix, creator and remixer are woven together in at the syncretic space the text of samples and other sonic material to create a seamless fabric of sound that in a strange way mirrors the modern macrocosm of cyberspace, where different voices and visions constantly collide and cross-fertilize one another. pg. 351

Text from: Algorithms: Erasures and the Art of Memory by Paul D. Miller

The text is about DJ music and mixing/appropriating sound. I'm drawn more to it for its use of language positioning the recorded/remixed sound as having an erased/lost origin. And the new combinations of sound becoming a new space or 'Autonomous zone'. These hybrid or in-between forms contain potent energy of change and tension. Additionally, the idea that these new spaces are rhizomatic, decentered and nonhierarchical seems like a perfect analogy for current lived experiences. The last paragraph of this text really states the urgency of our current state- created by technology.

All I can say is that in this era of hypermodernity, the current message has been deleted. Any sound can be you. It is through the mix and all that it entails the re-configuration of ethnic, national, and sexual identity--that humanity will, hopefully, move into another era of social evolution. I can only hope that the world can shift into this new matrix without too much disruption. The other options--genocide, internecine ethnic strife and warfare, the complete destruction of the environment, and the creation of a permanent underclass that doesn't have access to technology--are what the future holds if humanity can't come to grips with these new and explosive forces technology has released in us all. pg 354

Minimalist sculpture and music investigates the spaces between objects and their viewers and listeners. In underscoring the art object and the art viewer as interwoven into a conversation exchange in which the object produces the looking/listening, and the looking/listening produces the object, comes to suggest the field of attention as a performative arena. Thus, art objects do not so much contain or embody meaning but rather are given meaning through performative exchange. pg. 101

To Conflate the complexities of the voice with the aesthetic area of the arts is to pose a multilayered consideration, one that must leave the speaking subject behind to hear the sonicity of speech, while returning to the subject, as embodiment of an orality that is always already more than itself. The voice thus completes and complicates the signification of sound by adding and subtracting presence, by overriding the symbolic domain of language with too much signification, too much body, and too much voice, and by relying upon language, by keeping intact, as referent, the means of signification. Thus, to pursue the voice as heard in art is to approach a field of danger, for as sonic media the voice aims for language as its target.pg. 106

The first section is something I've often thought about but not been able to put into words. The idea that objects are performative in nature and the exchange between object and viewer as a conversation. Or even objects and other objects.

The second section relates to the multiple elements happening when speech is used in art- it is the content of the language as well as the sonic quality of the sound, how voice suggests the body and presence yet also is without the body. The challenge when using voice is that the listener often rushes to understand the language and may miss the content in sonic qualities.

Sighing is the sound of the body as it vacates itself, as it experiences the sensation of a creeping loss, of something falling through oneself to resolutely exit out of the mouth. In this sense, the sigh is a sort of rehearsal of one's dying moment: it shadows the body's ultimate gasp, that final sound and respiration. Pg.85

Lexicon of the Mouth: Poetics and Politics of Voice and the Oral Imaginary by Brandon LaBelle

Further thinking about loss, and absence- this text connects to ideas that represent loss in our day-to-day life. Each sigh a reminder of our last one. It's an eschatological bodily gesture. This could be interesting to sample for recordings- and manipulate for an installation.

The loss of place.

The acousmatic approach embraces this absence of place, exploits its utopian dimension by creating music who's sound exists nowhere else, slips into the gap opened by the schizophrenic mystery, by the split between the time of production and that of listening, populating this terra incognita with sounds never heard before, impossible acoustic transmutations. pg 114

Acousmatic and schizophrenic describe the same state, that of a spatiotemporal dislocation between the sound event and its being heard, between the time and place of its production and those of its reception. pg.  114

This is helpful for defining the idea of acousmatic. Which is a sound removed from its original source- ie. electroacousmatic (Speakers). There is a sense of loss between when a sound is recorded and when it is played back. I think this is why I'm drawn to acousmatic sound rather than live sound in my work- the playback acknowledges the loss of the original moment- whatever that recording maybe.

This could be a way of creating implied sonic textures or implied decay time.

Decay refers to how quickly the sound levels off to a sustain level after the initial attack peak. pg. 57

This is a description of the envelope of a sound or the ADSR (Attack, Decay, Sustain, Release)

The time it takes for reverberant sound to decrease to 60 dB below it's original level is called its decay time or reverb time and is determined by the room's absorption characteristics. The brain is able to perceive the reverb time and timbre of the reverberation and uses this information to form an opinion on the hardness or softness of the surrounding surfaces. pg. 71

I'm curious about the implications of sound being able to decay in the material sense similar to Fibers when they have been exposed to harsh environments. The section on hardness and softness echoes my interest in perception of texture- but its interesting to think about the comparison of how we see/feel/hear texture. Optic/Haptic/Sonic. This is further complicated by the idea of visually implied texture. Is there a sonically imply texture? Acousmatic sound maybe? 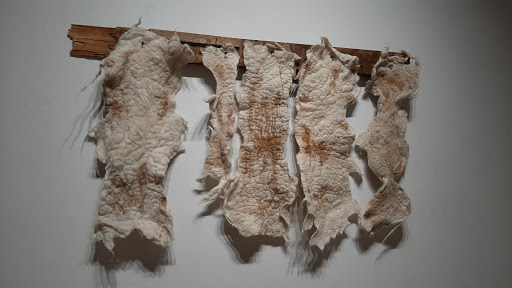 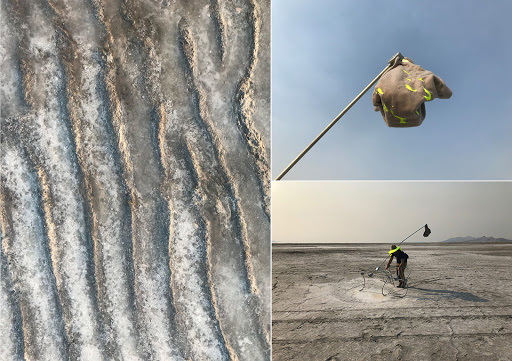 Memory and temporal structure are the new spaces of art to me. Deleuze and Guattari arrive at a similar point in their critique of late cap...